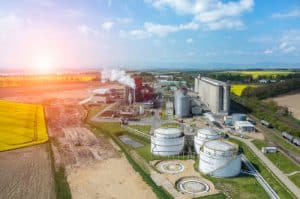 Fossil fuel has empowered the world’s economy and moreover primary power generation for over 15 decades. This includes coal, oil, natural gas, etc., and has been supplying around 80% of the world’s energy.

The fact that fossil fuel is harmful to the environment isn’t news. Air pollution from various pollutants is harmful to the environment and human health. Formed from the decomposition of million of years’ worth of buried carbon-based organisms, fossil fuel releases CO2 into the atmosphere when burned and damages the earth’s air quality. However, all of those doesn’t influence the market price of fossil fuel, instead, fossil fuel is considered one of the most profitable energy source, making it one of the biggest running business and money-maker in the world. In this case, externalities such as climate, environmental and health effects are often overseen.

Re:Build Optimation Technology has been aware of the need to develop alternate fuels and reduce global warming for decades and has been working with clients to meet these goals.  Collectively Optimation and clients have worked together in experimentation, innovation and full scale development of many biofuel manufacturing processes.  As the transition to green fuels continues these teams will continue to be at the forefront of green technology development.

In 2018, research showed that 89% of global CO2 emissions are derived from fossil fuels. Among these, coal is the largest factor in global temperature rise.

74% of US greenhouse emissions were caused by fossil fuels in 2019, ultimately influencing the air, earth, and ocean quality.

99% of plastics are also made from fossil fuels, resulting in almost 300 million tons of plastic waste yearly. It’s nearly impossible to decompose plastics, especially PET, as most bacteria are unable to break them down. UV sunlight can break down plastic molecules and decompose them in between 20 and 500 years, depending on the material.

It’s inevitable for all of us to start transitioning to renewable energy, this is if we want to save the earth. The time to think is yesterday, the time to act is today. With the whole world walking towards a zero-carbon emission future, several policies have been put forward to reduce fossil externalities:

It may come as a surprise that our lives have been highly dependent on fossil fuels. Without us realizing it, we’re living around goods and objects that are mainly created and developed from fossil fuels. The bad news is that fossil fuel isn’t just a source of energy, but also a fundamental element of our daily life. Memory foam pillows, synthetic fibers, clothes (e.g. nylon, polyester), storage containers, toothpaste, deodorant, etc., are all derived from fossil fuel to an extent. The list is never-ending, and all of them are tightly assimilated into our daily lives.

Although it may seem unrealistic and impossible to eliminate the use of fossil fuel in the world, it’s not impossible to reduce the usage dramatically and substitute this harmful element with a better, green, and environmentally-friendly alternative.

More broadly than animal waste, biofuels are the product of biomass, a wider net for plants and other organics. Whereas biomass is defined as living or recently dead organisms and any byproducts of those organisms, plant or animal.

Biofuels are derived directly from renewable organic matters such as sugar crops (sugarcane, sugarbeet), starch crops (corn, sorghum), oilseed crops (soybean, canola), and animal fats. Compared to fossil fuel, biofuel does not require a lengthy, slow, and natural process such as oil. Biofuel can be used directly both for household, commercial, or industrial use.

8 edible biofuels that are useful not only for transportation and heating, but also for cooking oil would be corn, soybeans, palm, sorghum, safflower, cottonseed, peanut, and linseed oil.

The average jet fuel consumption in 2020 is 45 million gallons per day, averaging about 1.08 million barrels per day.

The aviation industry has been one of the biggest energy consumers in the world and has contributed to a very big role in fossil fuel reliance, with an average of 2.5% of global CO2 emissions every year. Therefore, it’s considerably important to transition to zero-carbon flights.

With biofuel being considerably new in the industry, many technologies of biomass-based materials are in the making. Some of them are now available for commercial aviation, while some others are still in the research and development phase. Based on the type of feedstock used, each biofuel is processed differently to achieve the desired performance. Oil-based feedstocks mainly use hydroprocessing technologies, while solid-based feedstocks are converted to biofuel using gasification methods through biochemical or thermochemical processes.

Developing an economically affordable biofuel with sustainable feedstocks and an optimal process is considered a main priority in the industry.

Sustainable aviation fuels are currently developed to cut lifecycle emissions from aviation by up to 80%, making it the largest contributing factor to air travel decarbonization. The sources of aviation fuel are crops, algae, and industrial waste.

The International Air Transport Association (IATA) quoted that the estimated cost to decarbonize the aviation industry is US$1.55 trillion over the next three decades. Fortunately enough, with net-zero decarbonization as a goal, funding doesn’t seem like a roadblock with various private companies working to support the objective. During COP26, over $130 trillion private capital was secured.

Bio-aviation fuel or bio-jet as sustainable aviation fuel is forecasted to grow significantly in the next five years. Whether or not biojet will rise in the market can be observed through several conditions:

With these conditions in place, biojet supply and demand are predicted to range from 2-6 billion liters by 2026.

To achieve net-zero by 2050, SAF is estimated to contribute around 65% to the reduction of emissions with a massive production increase. Policies are expected to be accelerated by 2030 to secure global support. 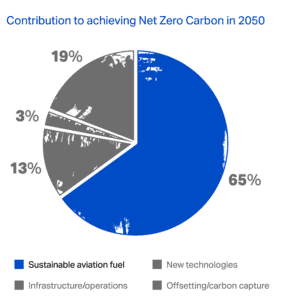 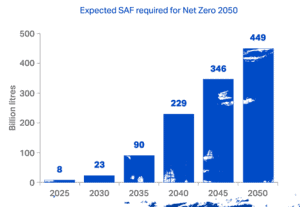 Since 2016, SAF has been experienced by more than 45 airlines, 370,000 flights, and seven existing technical pathways. By 2021, 100 million liters of SAF were produced, with around 14 billion liters of SAF in PA (Purchase Agreement) process by the aviation industry. SAF is proven to reduce emissions by up to 80% during its full lifecycle.

According to the American Society for Testing and Materials (ASTM), the seven technology pathways that are approved to produce SAF include five main categories:

In 2021, a flight from Chicago to Washington DC was tested to run on a fully sustainable fuel. As a result, the conclusion resulted in no significant performance difference between the use of fossil fuel and SAF.

When calculating CO2 emissions with fuel consumption per flight formula, the average CO2 emission is 90 kg CO2 per hour with fossil fuel. Generally, the CO2 that emits into the high atmosphere, results in a greater greenhouse effect than when CO2 is released at sea level.

Airbus’ A380 test aircraft MSN 1 took off from Blagnac Airport, Toulouse, France at 08h43 on Friday 25 March. The flight lasted about three hours, operating one Rolls-Royce Trent 900 engine on 100% SAF.

Airbus states that within 12 months, this was the third Airbus aircraft type to fly on 100% SAF, followed by an A319neo single-aisle aircraft in October 2021.

While biojet is currently less cost-efficient than fossil jet fuel, increasing the use of SAF is still considered the main priority to achieve net-zero carbon emissions. Waypoint 2050 report concludes that SAF could contribute between 53% and 71% of required carbon reductions. According to the Clean Skies for Tomorrow Coalition, the biofuel industry will expect a 10% cost declination by 2025.

Sustainable aviation is now certified to fly with a blend of 50% SAF and kerosene.

With plenty of proven research done to support the transition of renewable energy, we can conclude that biofuel is indeed saving the planet as green energy with the use of animal waste and crops, instead of fossil fuel.

The only challenge that remains is the lack of knowledge and shift of mindset and perspective. Most consumers are alluded to and fixated on the idea of a ‘perfect lifestyle and product’ that they try to attain the best image at the best cost. Most importantly, trusting large companies that advertise unaccomplished green initiatives on top of prodigious fossil fuel use.

Here’s the news, tree planting would do only a very small role in preventing and aiding the climate crisis compared to eliminating fossil fuels.

Here’s why biofuel is proven to be a great green energy substitution for fossil fuel:

Although other sources of renewable energy are on the rise, such as wind, solar, geothermal, etc., biofuel is by far the easiest and most realistic solution for the substitution of fossil fuel. Some challenges that may hinder the transitional process would be:

Today, the United States of America is the largest biofuel consumer and producer in the world. The next big four being Brazil, Indonesia, China, and France. For over 15 decades, almost US$3 billion has been invested in oil palm and sugar cane cultivation in various forest-rich countries by 2019. And around US$11.2 billion in 2019 was invested in biomass and WtE (waste-to-energy). Cutting down and eliminating fossil fuels is the fastest, most effective way to significantly prevent global warming and plays a major factor in achieving net zero by 2050. With that being said, biofuel is now recognized and considered as a proven and prominent exit plan for fossil fuel.

Re:Build Optimation has been actively involved in the design and construction of cellulose-based ethanol development and production systems. Our depth of chemical engineering and process automation skills coupled with our fabrication facilities and plant construction experience make us a natural partner as new feedstocks or enzymes are investigated and plant upgrades and modifications are required.

Optimation has been engaged in a partnership to convert ethanol from farm waste into jet fuel.

Optimation helped with breakthrough improvements to the process to enable the production of ethanol without enzymes.

Contact Optimation to learn how to make the perfect biofuel.