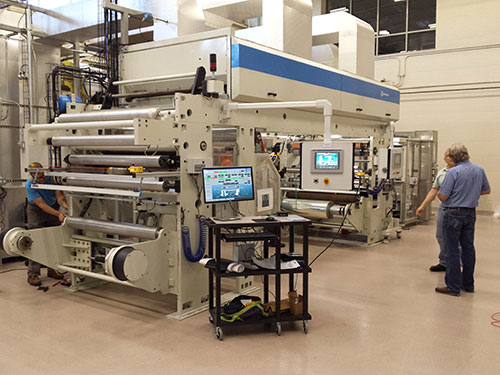 Web based processes have existed for over two centuries. Since first invented they have steadily gained in performance, speed and cost effectiveness.  The first web based processing machine was a paper machine. A continuous papermaking machine was patented in France in 1799.  Before that, paper was made one sheet at a time. You can imagine the efficiency that was developed with this change.  The technology continued to improve and evolved. The technology was soon implemented in America where it came to be known as the Fourdrinier Machine. Widespread use of the Fourdrinier happened in the United States early in the nineteenth century.

By the early 20th century, mills in New Hampshire were so efficient that they cut and processed over 40 million acres of timber. Today continuous, web based processes are widespread and have been developed for many other substrates besides paper. Speeds have increased dramatically. Some paper machines can move the web at speeds as high as a mile a minute. Current webs processes include foil, metal, paper, textile, plastic film, carbon, and even glass. Web based processes include coating, plating, and laminating.

After the web based process is completed, the material is often converted into small pieces for its final use.  Those who manufacturing using web based processes been heard to brag that they make everything by the mile and sell it by the inch. Processes like this can be used to manufacture items such as film, tape, sandpaper, roofing shingles, paper of all grades, many variations of plastic and even glass.  There are clearly differences in the behavior of these different substrates and in the way they must be conveyed and processed. The various thicknesses, surfaces, and behavior can cause technical challenges during manufacturing. Imagine the technical challenges in handling, conveying, and winding very thin webs made of glass.

For over a decade, one of Optimation’s competitive advantages has been in the development, design, fabrication and improvement of web based processes. Optimation owns and operates a web development laboratory – we call it the Media Conveyance Facility (MCF). Using this a s a focal point has strengthened Optimation’s ability to implement web based solutions. A variety of web based applications are undertaken to treat, coat, dry and measure a variety of flexible media based products. In addition to development Optimation’s MCF focuses on training.  Optimation’s web handling workshops provide students with a unique hands on experience in areas such as Web Handling Fundamentals, Web Wrinkling, Web Tension and Speed Control.