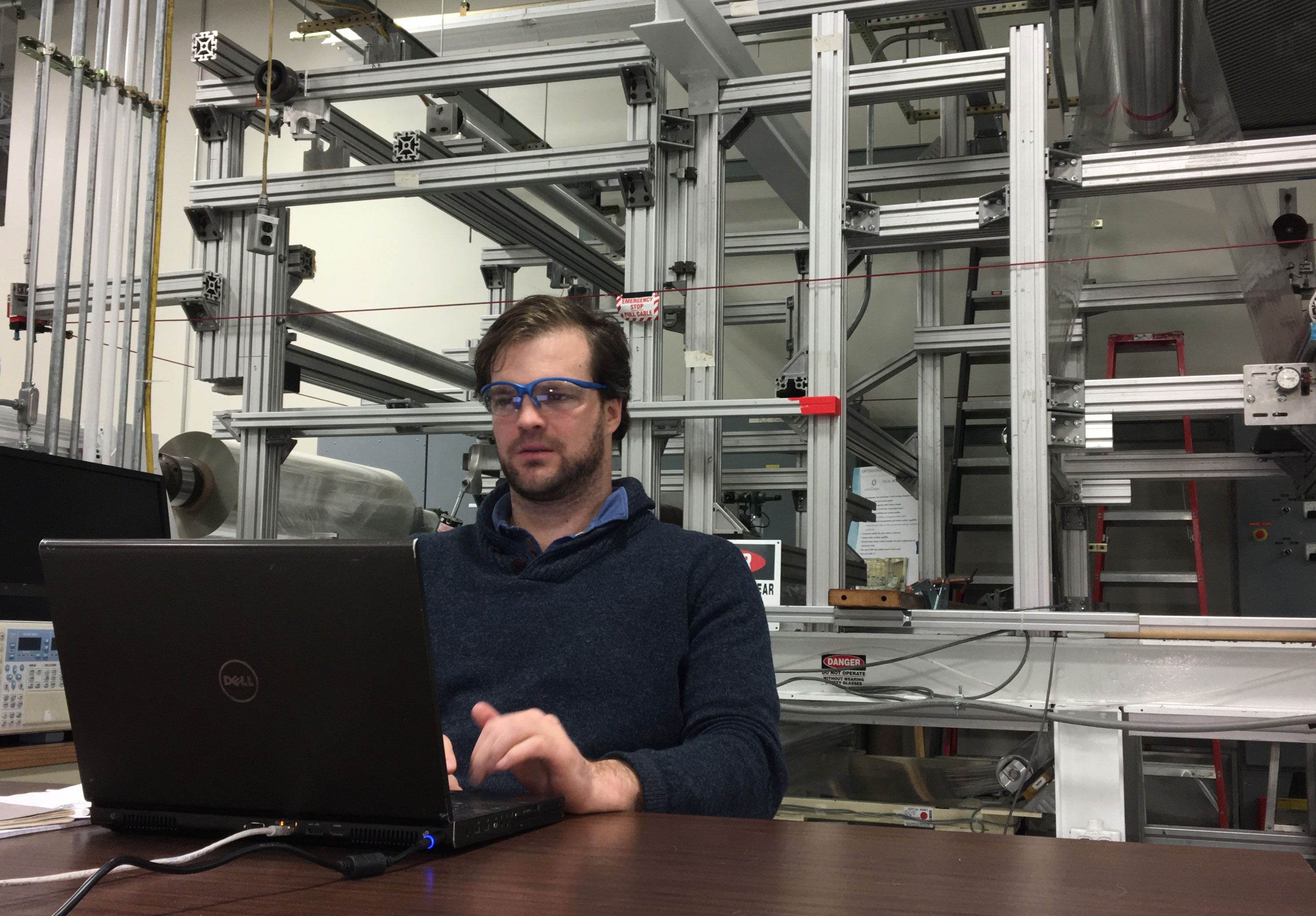 Recently a team of Optimation’s web conveyance experts teamed up with a pair of Eastman Kodak’s IT experts to create a means to demonstrate the power of applying a process monitoring tool to a known but illusive problem.  The demonstration involved using Optimation’s Thin Web Rewinder, one of the pilot machines located in our Media Conveyance Facility, and Kodak’ proprietary Process Monitor software.  We elected to use roller traction as the parameter of interest, because it is a functional attribute that is subtle, making it challenging to measure and status over time.

When we consider roll-to-roll manufacturing, which is a means of producing goods on a flexible substrate (things like film, paper, foil, etc.), we are aware that in order to process flexible substrates (or webs), we must be able to control their movement through our processing machinery. The primary force that allows us to move a flexible web through a roll-to-roll machine is friction.

It follows that if we are using the roll-to-roll manufacturing technique (R to R for short), our process will go out of control and cause product damage and loss if we have insufficient friction (or we experience slip) within our line.  The loss of friction, and the resulting slip, will be manifested in such defects as surface scratches, or wound rolls with uneven edges, or web edge damage due to lateral displacement into the machine structure, etc.

The unfortunate thing about loss of friction, or introduction of slip, is that it is difficult to sense and predict.

As many manufacturers are likely to do, there is always a challenge to operate R to R lines at their highest possible throughput, for maximum product output. In a web line, as speed increases, one of the dynamics that occurs is that friction begins to be reduced. This can be due to boundary layer air lubricating the interface between rolling elements and the web; it can also be due to perturbations in rollers caused by imbalances that the speed increase exacerbates.

The unfortunate thing about loss of friction, or introduction of slip, is that it is difficult to sense and predict. The typical outcome is that our owner/operator will know he has gone too far when he experiences one of the product losses described above.

Another common occurrence for companies that own and operate R to R equipment is machine performance changes/degradation over time.  As these lines run for longer durations, components like roller bearings, roller surfaces, etc. can wear and age.  These changes in the performance of the hardware can also serve to degrade the level of friction between the rollers and the web.

The premise of our demonstration was therefore based on this dilemma for a Roll to Roll equipment user:  How can I know before I experience slip if I have and am maintaining sufficient friction to operate my production line safely with regard to my product?  Our theory suggested that a simple friction test on a model roller, that would be repeated routinely and whose performance would be digitally recorded, could become a leading indicator of loss of friction and the potential resulting product problems.

To accomplish this, we reached out to the IT folks at Kodak, and asked them to apply their Process Monitor software, to our Thin Web Rewinder.

Our experiment involved installing a prony brake (I’ll describe this in a moment) around a smooth roller (smooth because this type of surface will lose friction and experience slip soonest, so it represented a worst-case scenario for our test).  Running on the surface of the test roller we installed a tachometer to measure speed (RPM).  An adjacent vented roller (much less prone to slippage) had another tachometer installed on it; this roller would give us our reference web speed.

Now for the prony brake:  This is a device where we wrapped a high friction strap, in this case leather, around our test roller and connected the strap to a pneumatic actuator; when we applied varying air pressure to our actuator, it in turn would create higher and higher drag forces on the test roller.

During our testing, we would use the inputs from both tachometers, and the pressure of our regulator, to detect when the prony brake had applied enough drag to overcome the friction between the test roller and our web.

We then created a baseline, where we ran a number of tests at speed, and repeatedly applied the prony brake to the test roller. Using the Process Monitor software to analyze our machine inputs, we learned that the amount of drag force to induce slip was relatively repeatable.  But our challenge was to demonstrate that we could predict a loss of friction due to a machine change.  To do this, we installed a means to perturb our test roller (we lashed an orbital sander to the machine frame adjacent to the roller and turned it on).

If this system were to be employed on production lines like we demonstrated in our lab, the machine operator would see the performance trend analyzed by the PM software and be forewarned that an issue had developed.

When we ran a series of identical test conditions with the vibration input, we saw a loss of friction (or more accurately, we observed slippage with less drag force applied to our test roller).  This observed loss of traction would be analogous to a similar machine degradation over time like that of a failing bearing, or a roller surface being worn smooth.

The output from the Process Monitor clearly showed how friction capability had been lost due to some change in the machine.  If this system were to be employed on production lines like we demonstrated in our lab, the machine operator would see the performance trend analyzed by the PM software and be forewarned that an issue had developed.

A further enhanced capability of the PM software is to be able to analyze the machine performance data several different ways.  One method employed was to calculate a Fast Fourier Transform.  The FFT can determine the frequency distribution of each input data stream.  One relevant statistic is the Dominant Frequency, which in this case, when looking at the speed (RPM) of the test roller, indicated that there was a cyclical disturbance at play.  This analytical output would be very valuable in helping to troubleshoot the loss of friction, as it is indicative of a rotating element being the root cause.

In an age where many companies are becoming interested in mining their business and production data, this demonstration showed how the analytical capabilities of Process Monitor software could have an immediate positive impact on observed machine performance by utilizing data input from instruments and devices tied to production machinery.

This ability to display normal process performance, and then detect trends that vary from that norm, would be a very powerful tool in keeping manufacturing equipment operating at peak efficiency.