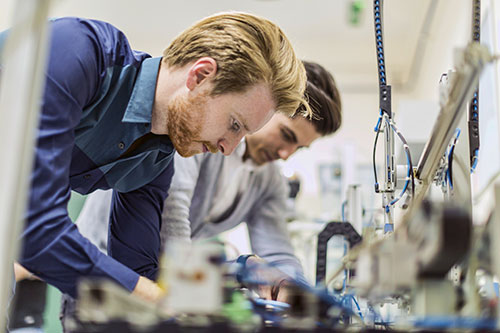 I saw an interesting article this week. It was about a vote taken in the European Union by a committee which would grant certain human rights to robots. While this does not apply directly to the subject of digital twins in manufacturing it is very much related to the topic. In both cases it becomes clear that more and more sophistication is being applied in artificial intelligence and computer programming. We have come a very long way since 1996 when IBM’s Deep Blue was first able to win against a human chess master.

The concept of digital twins was first developed a little more than a decade ago. The concept requires three elements: a physical product in real space, a digital twin in virtual space and information that links the two. With sensors connected to the physical product, the digital twin can better track the actual product and changes taking place with it. A simple example could be alignment of a machine in a production plant. The production line’s digital twin would be able to analyze and determine what is happening and predict what will happen next. Using this information, and how it may degrade product quality, or when the machine should be shut down for maintenance. All this would be described to the production operators and engineers in the manufacturer’s system data base.

With the digital twin concept, we are talking about a twin of the physical product managed digitally. This will help us make smart connected products for better operation, performance and service. It can also aid in predicting the reliability and quality of the manufactured product.  The digital twin can change the way we do manufacturing. Ultimately, this will help eliminate huge warehouses, spare part stocks, and manufacturing setups. The digital twin managed machine will identify the serviceable part or a mission critical part gone wrong, and 3D print a spare part at a fraction of the cost.

If we carry the concept a bit further, what would be out of the realm of possibility of making a digital twin for each of us? Loaded with our DNA, and what we have and are learning about it, we would be able to watch the digital model and predict what diseases we would get and when they would manifest themselves. Using this knowledge, we could schedule preventive actions before they happened, load this into the digital twin and see what might happen next.

Isaac Asimov in his science fiction classic trilogy, Foundation and Empire, written 60 years ago, predicted that the universe would be governed by a Galactic Empire gaining its power from the use of a massive “digital twin” which predicted everything that would happen in the universe.  Asimov had never heard of the term of course, in his model it was called psychohistory and it combined history, sociology, and mathematical statistics to make predictions about the future.  In the end of his tale the digital twin failed because of an unpredictable mutant, the Mule.

Digital twins will do a great deal for us in the future. Failure prediction, maintenance, and rapid parts replacement will all be possible. But, we are talking about manufacturing in 2017.  It is certain that not everything will be predictable.  At the end of 2017, we can be certain that there will still be lots of area where digital twins and their amazing predictions will fail and we will fall back on well-trained, creative-thinking, human technicians and engineers. It will still require good old Yankee ingenuity to engage the most difficult problems in the manufacturing plant and fix them.