The Miracle of Stem Cell Therapy 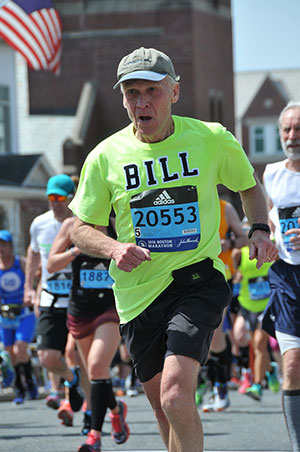 About a year ago I visited the University of Rochester sports medicine group and met with a n orthopedist for a diagnosis of the pain in my right knee.  I had tried weeks of my usual stretching and rolling without achieving any results.  After an x-ray was taken the orthopedist sat me down and showed me the advanced arthritis in the knee and the bone on bone.  He said I needed a total knee replacement and offered to schedule it.  I asked if there were any alternatives.  He offered to give me a cortisone injection which he said would delay the need for knee replacement by four or five months.  I declined both of his offers and left the medical center determined to find alternatives.

I’m a lifelong runner.  I ran track and cross-country in college.  In the years that followed, my training was random.  I would periodically whip myself back into shape and take in a 5K or two.  Sometimes I even finished in the top three in my age group.  Six years ago I began a more serious and regular training effort.  One day, while trail running, I came to the realization that I could run a marathon.  I went home that night and signed up.  The result was a Boston Qualifier, and in April 2012, at age 63, I ran my first Boston Marathon.

It is a race like no other.  The city declares a holiday and nearly a million people line the 26-mile course to cheer on the participants.  The experience is addicting and after my first run there I was hooked. I set a personal goal of participating in 25 Boston Marathons.  The bombing in 2013 caused Boston and the BAA to raise the bar and they made the event even more amazing.

Marathoning is fun; the training brings on hours of endorphin enhancement and happy times.  By now I have participated in 14 marathons and six Boston marathons.  But, like all runners I have experienced a litany of injuries and I have worked with a variety of coaches, physicians, physical therapists and surgeons to overcome them.

When I visited the sports medical center last year I had reached a new low point and was having increasing pain in my knee. Running was painful and difficult.  Most days it was all I could do to get through a few miles of walking, jogging and hoping.  After I left the doctor’s appointment, knowing what the diagnosis was, I redoubled my efforts. I tried different shoes, changes in my pace, and tried every kind of stretching and exercise.  Little by little I did find a way to run, to reduce and tolerate the pain and increase my distance.  Some days were better than others. I did discover that more running seemed to strengthen the muscles around the knee and help reduce the pain rather than increase it.  Running wasn’t easy, but I was still running.  And all the while I kept looking for ways to improve and alternatives for knee replacement.

In February, while reading Runner’s World, I came across an interview with Jonathan Finnoff, Medical Director of the Mayo Clinic Sports Medicine Center in Minneapolis.  He talked about stem cell therapy for treatment of arthritis in the knee.  Stem cells injected into the knee, he said, may create new tissue. “Stem cells can grow new cartilage, and if this can happen in a joint, it may prevent the need for a joint replacement.”  I began to get excited.  I decided to make some phone calls, and maybe I would take a road trip to Minnesota.

During my research on stem cell therapy for treating arthritis of the knee, I went online to find possible alternate medical centers that offered the treatment.  To my surprise Dr. Michael Maloney, Director of the University Sports Center at University of Rochester was carrying out the procedure.  I called and scheduled a consultation and then an appointment.  Last week I had my own stem cell procedure.  A team of six met with me.  They drilled into my tibia and extracted 80 ml of bone marrow.  They filtered it and ran it through a centrifuge and extracted 4 ml of my own stem cells.  Then they injected those stem cells back into my knee.  If all goes well, those stem cells will begin to rejuvenate the meniscus.  Based on what I have been told, I am expecting to begin to feel some improvement in two to six weeks.

Since I first learned about stem cell therapy for the knee, I have talked to a number of people who have personally experienced it.  I met a Nigerian professional soccer player who had been treated successfully.  I found an individual who, three years ago, was one of the earliest cases.  He had both knees treated but only one responded successfully.  I learned of someone who very successfully treated their second knee with stem cells after they had had the first one totally replaced.

The procedure has come a long way in the last couple years.  It’s moved from a surgery and general anesthesia to an office and local pain treatment.  It’s gone from research to practice.  It was initially a three-visit process.  Now it takes little more than an hour.  It’s still not mainstream enough to be covered by insurance, but the price has come down enough that the cost can be justified for the pain reduction and quality of life it can bring. For me it was $3,000.  In my high deductible health care plan, I would pay the first $3,000 anyway.

There weren’t answers to many of the questions I had for the doctor.  I was the twelfth individual he had treated in this way.  The database of results is too small to know everything conclusively.  But the good news is that as many as 90 percent of those given stem cell treatment for the knee have positive results.  It is also good that there is very little down side.  Since it the patients stem cells there is no rejection.  The process can be repeated and can be supplemented with PRP or other medical procedures.  There is still the option of Synvisc-One or other lubricating fluid.  And as a as a final option there still a full knee replacement.

I’ll start running again after a two-week break to allow the knee to recover from the injection.  I have a shorter training season than usual, but I’ll be running in the Via Marathon in Bethlehem, PA on September 10.  I expect to run a qualifying time there for Boston 2018.  I am grateful for the miracle of modern medicine and the talented and committed individuals who bring treatments like this to us.