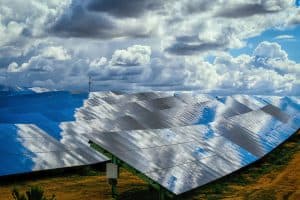 Welcome to Part 2 of this two part primer on Solar Panel Manufacturing.  In part one we explored three anchor types of solar panels that exist in the PV industry.  We looked at the chemical makeup and design of the products and some of their pros and cons.

Part Two is an explication of a fairly standard photovoltaic manufacturing process.  Consider this a 50,000’ view of the process and something that is a great starting point to understand one way to get from raw material to a functional photovoltaic product.  This is an excellent first pass to learn about the steps in manufacturing a solar panel and great fodder for eventual brainstorming and planning for your eventual projects that involve PV/Solar.

Cost-effective silicon solar panels are impossible without affordable silicon. Labor costs are high, but silicon is what makes the product worth selling. Silicon is used as a semiconductor in solar cells, and silicon’s conductivity changes with its temperature. However, solar panels’ efficiency can be improved if the temperature is lower than usual. Manufacturing low thermal-grade silicon in industrial blocks such as ingots requires the production of several items including crucibles and press molds for casting.

With that being said, let’s go over the basic steps of manufacturing silicon solar panels!

As mentioned at the beginning of this article, solar panels are made from thin-cut wafers of crystalline silicon, that is produced by purifying metallurgical grade silica or sand. The process of transforming sand to crystallized silicon is energy and capital-consuming, done in a furnace at a very high temperature, and results in the creation of solid silicon rocks. High-purity silicon is produced from quartz.

Crystallized silicon, collected in the form of rocks, is then melted to create ingots (in the shape of a cylinder). Atoms are being aligned throughout the process and infuse boron, which gives ingots positive electricity polarity.

Monocrystalline cells are typically manufactured from a single crystal of silicon, having higher efficiency in converting solar energy to electricity. On the other hand, polysilicon cells are made from several silicon crystals that are melted together. Often you’ll be able to recognize them based on their shattered glass appearance. These cells are then highly pressurized several hundred times after which a varying shade of black or blue colors is applied to the cells. After the ingot cools down, it is ground and polished, leaving the ingot with flat sides. The costs for this process are generally less expensive, while monocrystalline panels have considerably higher cost. 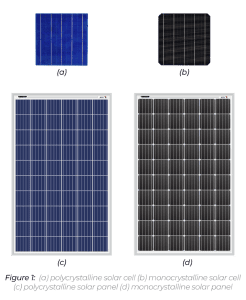 After ingots are cooled down they are turned into silicon wafers that are only a few millimeters thick. The silicon ingot is sliced into thin disks by a wire saw. The wafer is as thin as a piece of paper. In order to reduce the wafer’s shine effect – an anti-reflective coating is being put on it. This coating is set out to absorb the sunlight instead of reflecting it to increase energy conversion efficiency.

To form a p-n junction, a straightforward process of diffusion called doping is used. Through phosphorous doping, negative electrical orientation will be charged to the surface. With boron and phosphorous combined, positive (P-Type) – negative (N-Type) junctions will be formed. This is a very important and critical function for PV cells as wafers are treated and metal conductors are added on all surfaces.

Semiconducting, N-type, and P-type silicones are formed in the grid that forms the solar panel. Soldered together, the metal connectors will link the cells. Once sunlight hits the panel, the difference and imbalance in electrical charge will flow through the metal connectors, generating electricity as they flow out from the silicon to the metal.

After creating a grid, a thin layer of glass (around 7 mm) will be added to the construction’s front side – angled towards the sun. The back of the panel will be covered with polymer-based material. This increases the panel’s durability and prevents external grimes, particles, or dirt from entering the panel.

The panel’s parts and elements are glued with ethylene vinyl acetate. Its quality is also a key factor in the panel’s mobility, and efficiency as it will face extreme weather with different angles, placements, and locations.

All modules must undergo testing. Standard Test Conditions (STC) are used as a reference point. A test report is generated at the end of each module’s testing phase to ensure quality and performance assurance. The panels are placed in flash testers at the photovoltaic manufacturing facility and subjected to 1000W/m2 irradiance, 25°C cell temperature, and an air mass of 1.5g. The results are compared to the standard values for that panel type to ensure that each one meets the required criteria. Once all the panels have been tested, a final report is generated for you with all of your specifications, as well as any other information about your solar panels, including but not limited to power output, efficiency, voltage, current, impact, and temperature tolerance ratings of each panel.

Lastly, cleaning and inspection are done as a final wrap-up of the production process before shipping and logistics.

Tackling renewable energy challenges demands the right resources… Our suggestion is for you to add Re:Build Optimation experts to your team. We offers services for development and deployment of renewable energy resources, especially in manufacturing the perfect solar cell.

Contact us today to find out to find out more or to request a case study and be sure to read the exiting future of Perovskite PV Solar Cell Technology in part three of this blog series.