Our Migration Toward Renewable Energy and a Green Future 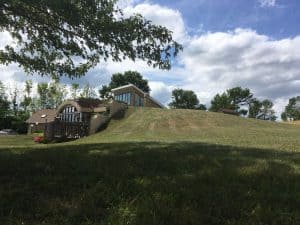 George Jetson, patriarch of the Jetson family, and hero of the space age future was born July 31, 2022, or so the fact checkers claim.  The Jetsons show was based on life 100 years in the future of the show, created in the early 60s.  That means we still have another forty years before we arrive in their decade.  Innovation does move quickly.  And there are a lot of things the Jetsons had right, and some of them are happening 40 years ahead of the predictions.  In the 1960s the Jetsons’ videophone seemed like a dream.  Now we have FaceTime, Zoom, and Teams, and we’re getting tired of them.  We also have flat video screens for our computers and television just like the Jetsons.  And we can make phone calls or watch TV on a wristwatch.  But in spite of all of the technology, the Jetsons don’t spend a lot of time explaining how their flying car or Rosie the robot maid were powered.  There is no mention of wind power or solar power or lithium batteries in their view of the future.

I was a child of the 70s and watched reruns of the Jetsons.  But even more exciting to me than the Jetsons was the arrival of the first environmental period ushered in with the first Earth Day in February 1970.  There were so many exciting technologies to explore in the Scientific American and in a more down to earth perspective in the Mother Earth News.  I built a methane pit to process garbage and a windmill that used a car alternator to charge a lead acid battery.  I started construction on an ethanol still so I could avoid paying for gasoline.  I read about fuel cells and the suggestion that in the future there would be no transmission lines because every home would have its own fuel cell power system.  Most of the technologies I tried were too immature to be economically viable and I eventually abandoned most of my experiments.  I did build an underground house using as much available technology as possible to conserve energy and help save the earth.  That proved to be successful, and I still live in my underground home today.

The excitement of the earlier environment movement wore off for the general population and the popularity of the Whole Earth Catalog and the Mother Earth News faded.  It took almost a half century before technology advanced enough to for renewable energy to be consider economically viable.  In large part today this is not driven by grassroots efforts but more commonly by government mandates and government funding.  Not every initiative taken by government has proved wise or successful.  In many cases large government grants have been wasted.  Some government decisions and mandates are not well thought out and sometimes take steps toward green energy backwards.  In New York, for example, nearly 60 percent of electricity generated ten years ago was carbon free, about 35% from nuclear, about 20% from hydroelectric plants and smaller amounts from wind and solar. The state began closing nuclear plants and relying increasingly on fossil fuels to replace the lost generation.  Today carbon free power generation has declined in spite of huge subsidies and efforts to install wind and solar generation.  To show the contrast consider that wind power in NY generated 450 Megawatts of power in 2021 while Niagara Falls generated 4.6 Gigawatts of electricity.  Capacity factors of inland wind sites in New York are on the order of 30% of their rated capacity.  This can drop to ten percent due to both the seasonal and daily patterns of the wind generation being largely out of phase with load patterns.  Replacing fossil fuels with wind energy in New York is not a practical solution.

In spite of the challenges and the limitations of a quick transition, I am still excited about creating a carbon free future.   At Re:Build Optimation developing systems for a greener future is one of our focuses.  We work with clients developing more efficient wind power systems, fuel cell technology, lithium batteries, more cost-effective solar cell systems (made in the USA not China), carbon free hydrogen and even jet fuel from farm waste.  There are many exciting new sources of green energy, and we need to continue our work on making them efficient, reliable, and cost-effective.  We need to recognize that developing these new technologies at the necessary scale to replace fossil fuels will take time, perhaps a long time.  In the near term we should take full advantage of the abundant natural gas available in New York and many other places to provide cost effective power with a minimum of emissions.  The dream of renewable energy will happen, but it will happen decades from now.  George Jetson may not have talked much about it but perhaps by the time he is 40 years old his flying car will be an EV.