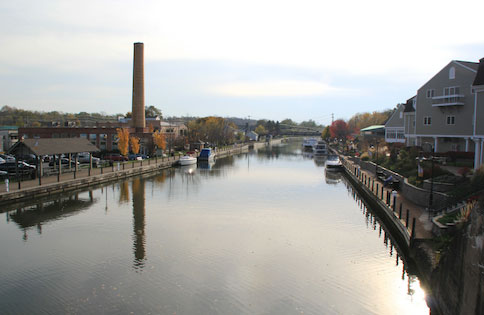 In reflection we can see many exciting times in manufacturing in New York over the past three centuries. Technology and manufacturing have been accelerating ever since the American revolution. In the early part of the 18th century there was a limited amount of “manufacturing” done in the colonies and what little was done was carried out manually by artisans and craftsmen. Each item was made manually, one at a time.  Meanwhile in Europe, technology was advancing at a much faster rate. Benefits of this technology came to America by importing items made in Europe. The Americans traded agricultural goods for these imports.

In Europe, the First Industrial Revolution began with the use of waterpower and accelerated with the use of steam powered devices after James Watts dramatically improved the efficiency of the steam engine in 1765.  Factories flourished.  As the American Revolution took place, finances were needed for the war effort and industrialization was delayed. It wasn’t until 1793 that the first American Textile Mill, Slater Mill, was opened with a design “borrowed” from mills then in production in England. In years after that, many other mills were opened in Massachusetts, New York and New Hampshire.

War continued on the North American continent through the War of 1812. During this period, advances in industrialization and manufacturing continued. Two events had major impacts on the speed of this process. The first happened in 1807 when the United States Congress passed the Embargo Act. This act stopped the import of goods manufactured in France or Great Britain. If Americans wanted to have manufactured goods they would need to manufacture them themselves. And they did.

The second event was the passing of the Corporate Entity Law in New York. This law allowed individuals to pool their money and collectively own a company. Manufacturing began to flourish. Buffalo, Syracuse and Rochester were all founded in the early 19th century. In 1824, the need was seen by Stephen Van Rensselaer for a technically educated work force to lead this industrial revolution and he founded Rensselaer Polytechnical Institute, the present home of the CATS center that hosted this conference.

The Erie Canal was opened in the following year, connecting the Empire State from one end to the other with commerce, and by way of the Great Lakes, this opened much of the western part of the United States to manufacturing goods made in New York.

It has only been in the past decades that New York has seen a decline in its influence. With the help of the fourth industrial revolution, functionality provided by Industry 4.0, and the innovation of New York’s technical leadership, it can once again take its rightful place as a manufacturing leader in the United States and the world.