Manufacturing in Rochester – From the Perspective of Time 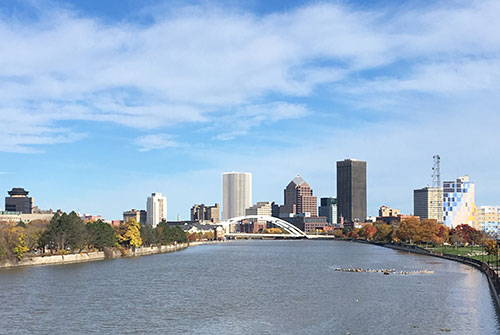 The byword of the presidential campaign and the new administration has been creating manufacturing jobs in the United States.  But even before the change in leadership in Washington there was a push to create manufacturing jobs, save the automobile industry, provide funding to create apprenticeships and new qualified tradesmen.

Rochester, NY is a good example of a city that fifty years ago was a strong manufacturing center. Back then there were three dominant manufacturers, a lot of medium-sized firms and very few small manufacturing firms.  A lot has changed since then.  The big three are still in Rochester but none of them are dominant in their industries or big any longer.  After decades of decline, even recent years have not treated them well.  Bausch and Lomb and its parent have gone through several scandals.  Xerox has suffered setbacks and recently split in two.  Kodak, after its bankruptcy five years ago, still struggles. Guy Kosov, writing for Seeking Alpha, recently suggested that they are headed there again.

The news for the historically big three is not good.  But the news about manufacturing in Rochester is very encouraging.  There are hundreds of small manufacturing companies springing up in Rochester.  They have hired employees trained and honed by years of employment at one of the big three.  Amazingly, they have adapted to a spirit of entrepreneurship and are building small, lean successful companies.  Many of them have moved into Eastman Business Park (EBP), the infrastructure that once was an industrial city supporting Kodak’s activities.

There are over sixty tenants in EBP right now.  Many of them are small start-ups.  Others are well funded and thriving.  Part of the former Kodak campus is being converted to massive clean room space and will be occupied by AIM Photonics, and funded by over half a billion dollars in federal and state funding.

Dozens of smaller companies are part of the Rochester photonics community and using their imagination, initiative and skills to create their own value in the photonics arena. The University of Rochester has contributed and created large amounts of intellectual property which it is licensing to smaller firms for commercialization. Organizations like the Rochester Chamber of Commerce, Greater Rochester Enterprise and High Tech Rochester are working together to create a business-friendly environment and to spread the word that Rochester is a great place to visit, move to and start a business in.

Employment is gaining. Rochester had a higher rate of growth for millennials than most cities in the region. It is well known that cities doing a better job of attracting people in their 20s are better poised for future city population and economic growth. This is a sure sign that Rochester is a good place to live, and that new challenges, employment and opportunities exist.  There is a lot of anticipation in Rochester these days. It will be exciting to live and watch the development over the next decade.