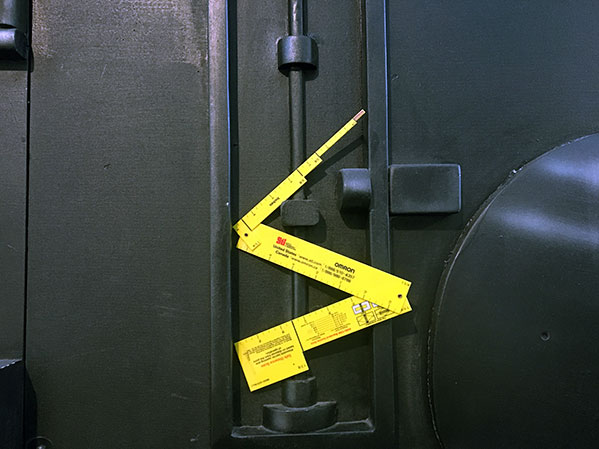 It’s human nature to find ways to work around the rules.

The National Safety Council tells us that 89% of workers ignore some, or all, safety rules.  So simply having a rule, or posting a sign that says “Keep your hands off this dangerous thing” is unlikely to be a foolproof method of keeping employees safe during operations in their plant.

It’s because of human nature that machine guarding is necessary. Too many people need to be protected from their own bad behavior and lack of respect for safety and rules around moving machinery. Many facilities managers put up signs and send around memos. “Don’t do this” or “don’t do that,” but employees do it anyway.

An alternative, and supplement to rules is machine guarding. Machine guards don’t always need to be sophisticated or expensive.  And effective guards can prevent many accidents.  One tool to help design machine guards is the Gotcha Stick. The Gotcha Stick is a simple, low-tech device that measures the distance of barriers from pinch points or moving parts in your machinery.  If the barriers are at the right distance to keep people from reaching in and messing with the machinery, then they’ll pass the Gotcha Stick test and keep machine operators from getting hurt. Applying the rules of human nature, we can say that it’s generally easier to change people’s environments than to change people.  If you really don’t want people to touch something, erect a barrier and test it with the Gotcha Stick. Extend that lesson across the facility. If you don’t want people opening the cabinet to do things to the component, make the cabinet hard to open. If you don’t want people to change the settings, make the changing of settings require a password that’s hard to come by.

Omron first introduced the Gotcha Stick as a safe distance scale. Although not officially adopted by OSHA, the Gotcha Stick is based on data from “A Review of Machine-Guarding Recommendations,” by Donald R. Vaillancourt and Stover H. Snook of the Liberty Mutual Research Center for Health & Safety. This data redefines the dimensions of the human arm and hand for the purposes of machine guarding.  It tests the allowable barrier opening size based on the distance from the point of operation and verifies that openings in hard guarding will not allow the pinch point or moving part to be accessed by the operator.

A simple example of the use of the Gotcha Stick is shown in the two illustrations.  The device is a crumb catcher used at a bakery for collecting crumbs from a bake goods line.  There was a guard on it with lots of signs saying danger and keep your hands out.  But human nature is to think they can put their hands in if they are careful, in spite of the signs.  And employees put their hands in the crumb catcher and their hands pinched in between the bars.  In addition to human pain, these accidents cost money.  So, this needed to be prevented.  It was time for a machine assessment with the Gotcha Stick.  Based on the pinch point, which was six inches down, the Gotcha stick recommended a 5/8 inch gap.  You can see the revised guard second picture. And now no one can get their fingers in close enough to get them pinched.  No more Gotcha! 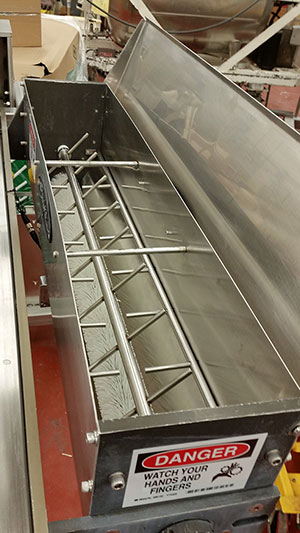 We all know that even when employees make poor choices and fail to follow training and rules that in the end the liability may fall on the employer.  This means that machines and processes must be designed in such a way to minimize any chance of injury.  At Optimation we employee safety engineers, safety technicians and others who can help design safe and fault tolerant systems for manufacturing plants.  They know how to use the Gotcha Stick and it is one of many tools in their kit to design and implement safer work places for manufacturers.