4 Types of Robots You Should Know 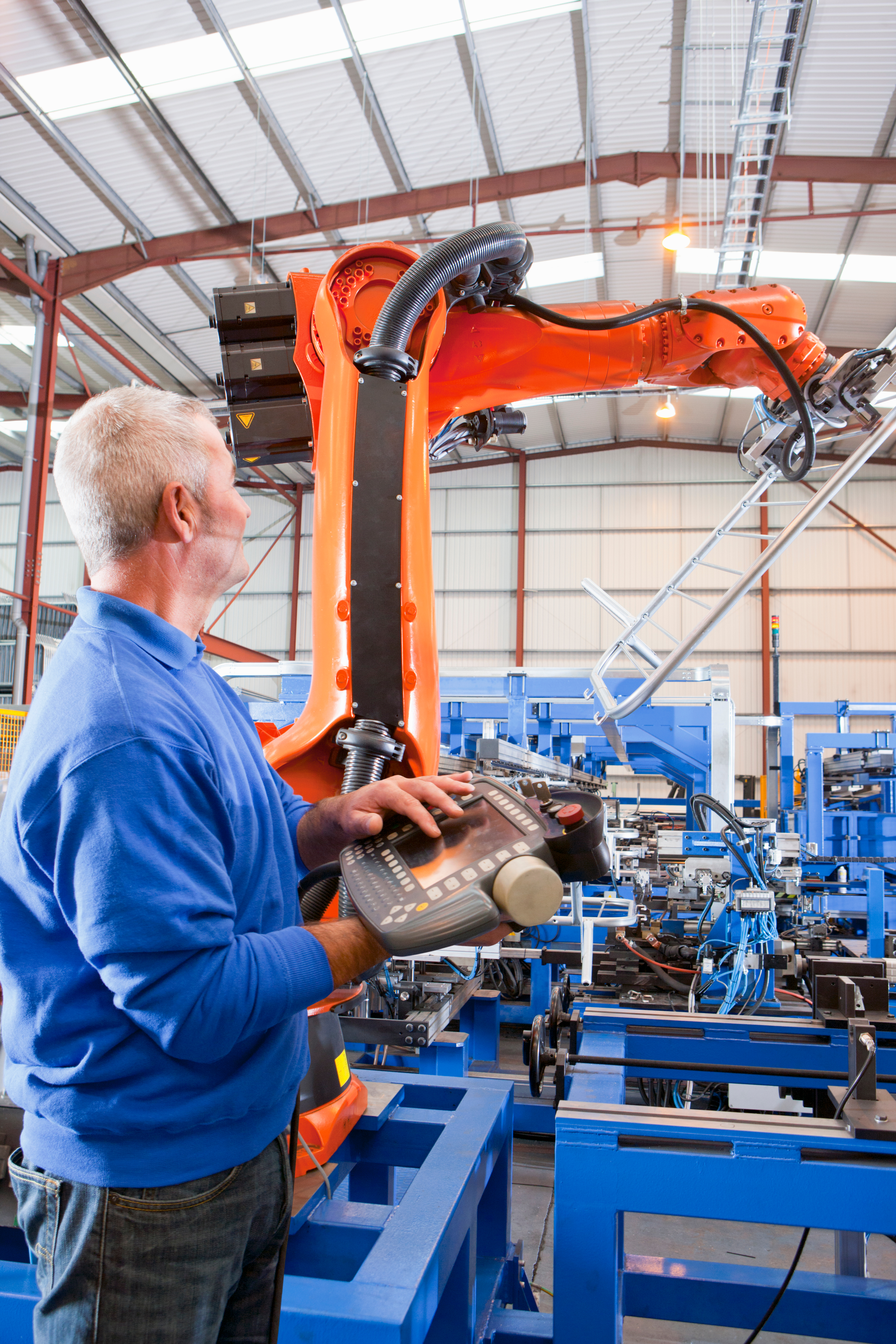 We manufacturers know what a robot is and is not – and for all intents and purposes it’s not Data from Star Trek, Luke Skywalker’s sidekick, nor is it an angry AI bot from the new Netflix hit Mitchell’s versus The Machines (Hot Tip: If you have kids this is a must watch family fun film – You’re welcome.)

What Robots ACTUALLY are is a tool. Just like a hammer is tool for a specific job performed by a human, a robot can be an automated tool to perform a specific task and, as you would expect from your tool selection, you want the right robot for the job. Thus, while the term robots for many is a brag point or, at the least, sounds very “cool” let’s agree now that as tools go we want to be specific and use the right one for the right job to achieve the results we desire. Before we start talking about the types of robots, though, let’s go back in time to how we manufacturers used robots in the past.

The Historical Attitude towards Robots

If you go back in the history of robots, they came into our production/manufacturing environment created or prepackaged with certain functionality. Due to their initial high expense when they were first introduced, the industry implemented robots as machines that could be repurposed (reprogrammed). They could either do multiple jobs in a batch setting or they could be relieved of duty on a specific task and then set up to do something else. If your business needs shifted, the idea was that you could remove the robot from something like your paint line and reprogram it to do something else, like say spot welding. This would effectively preserve the investment that you made in the tool.

As time has progressed, and the industry has gotten more efficient and driven the cost down on robots, you see less and less reuse or repurpose. Early on, robots were a separate field because they were sophisticated, complicated, and expensive (requiring separate and dedicated support). You had to work hard to justify the cost. In more recent times, robots can be compared to something like a Bridgeport end mill, which is a foundational tool in many shops, and can be used indefinitely. Robots are now beginning to approach this type of model in terms of application and use.

Now that robot solutions are far more cost effective, the high incidence of implementation within manufacturing lines has in some ways commoditized the technology. Today, manufacturers consider the desired outcome of a manufacturing process far more than the cost of the robot they might be considering and therefore are more concerned about the immediate automation task instead of asset cost recuperation. Consider PLC’s (Programmable Logic Controllers) and how many may be used in a single line. If we have reached the point in our manufacturing systems where we considered PLC’s to be common and inexpensive, we’re on the verge of seeing robots in the same light. Their presence and contributions to productivity and quality allows their investment to be paid off in the short term and obsolescence is therefore more tolerable as a potential longer-term outcome.

Articulated: If you have ever seen video of an automotive manufacturing line you likely have seen large yellow arms performing welding tasks. These have multiple points of articulation (joints) and often have tooling at the end which can be modified to do tasks such as pick-up/hold objects, paint, weld, and more. The word FANUC is often applied as the type of robot, but this would be inaccurate. FANUC is a brand which has achieved a marketing status like Kleenex has for tissues and Xerox has for copies. ABB, Mistubishi and Kuka are several other noted robot brands, among many other famous brands. These manufacturers all offer their own suite of features and support while their machines operate through the same basic envelope.

These work with both light and heavy loads and have broad applications from Pick and Place to Assembly, Welding, Packaging, Palletizing, and more.

EXAMPLE: Optimation worked with a brick manufacturer who had a massive FANUC robot moving 100 bricks per motion from extruder to kiln. This heavy payload was moved in a large sweeping motion between the in-line flow of the forming line and the pallet loading step in preparation for firing.

SCARA: The acronym SCARA stands for Selective Compliance Articulated Robot Arm. Compared to a fully articulated arm, this articulated arm is much more cost effective (dare we say cheap?!?). The articulations on this type of arm are generally limited to planar motions.

These robots are often used for Pick and Place, Assembly, Inspection, Packaging, and Dispensing.

EXAMPLE: In many assemblies that generate small parts that need individual packaging a SCARA robot will be used to pick up a part and deposit them into their end package. Prior to deposit, a SCARA robot may pass sensing stations that do a final quality assurance test which would either green light the packaging or send the product to a defect bin for further review.

Delta (High Speed Spider): The name Delta likely comes from the triangular shape of the spider arms that project off the base of this machine. Three armatures are connected to a center “head” which can be fit with various tooling options to allow this robot to maneuver fast and position to meet product at whatever orientation it may arrive in. A light sensor or optic is often paired with this robot to help it sense orientation and adapt to aim itself to perform its task with precision. These machines are fast and geared towards light loads.

Normal applications for Delta or Spider Robots are Pick and Place, Assembly, and Inspection – usually in relatively high-speed settings.

EXAMPLE: Many plastic extruders create parts that by design fall out of their molds into a bin or onto a conveyor. A Delta robot could identify parts and set them into a desired orientation for an upcoming assembly process. Since most extruders have the potential to output high quantity with speed, a Delta robot may be the right product to keep up with the flow of parts.

Cartesian Robots: Given the name “Cartesian” you are right to think of coordinates. Cartesian robots move in a combination of X Y and Z axes via linear actuators to maneuver a head into a position.

EXAMPLE: An automated gantry crane would qualify as a cartesian robot. High Bay warehousing is also a type of cartesian robot. In both examples, these are Pick and Place applications that can likely take extreme weight. There can be reasons to use smaller scale versions of cartesian robots to perform tasks like dispensing, assembly, and inspection.

First off, we recommend not naming your robot a human name. Then you will get too attached and make decisions that are emotional instead of task oriented. People will also look at you funny.

Seriously though, the key to identifying your robot returns to the task at hand. The four types of robots are helpful to understand but the solution you need will provide a result that satisfies your project requirements and you budget tolerances. If you notice, all four of these robots can Pick and Place. However, it does not necessarily follow that all of these types of robots will be a good fit for your process as well as your business. One style may be more right, and then there are model, and manufacturer concerns to consider as you venture into discovery.

The point of all of this is to say that your use of a robot is based on getting the result you need. Here at Optimation we are agnostic when it comes to both the solution and the manufacturers we specify. Our fiduciary ties are to the client and their needs and as such we might just tell you that robots are not for you. Automation is a very broad world that we are well versed in we do design, build, install with results in mind.

In our business we want to concentrate on being sure that the methods that we are recommending solving a client’s problems are the most appropriate the most efficient, will help them meet their goals and so on. So, we push ourselves to set the bar high when it comes to proposing solutions. Even if a client comes to us and says, you know, we want to install a robot to do this and such, right? We will take that under advisement and challenge their presumption that the robot is the right answer to solve their problem. But we will still do our due diligence. And compare robotics to other ways to accomplish what they need to do.

If you are tasked with researching a robotic application for your manufacturing line, consider broadening the search to “finding an automation solution” and asking Optimation about all of the options that could be on the table to accomplish your desired end result.